Homescreen - Take control of your apps#

Both centralized apps and DeFi have one huge weakness - the developers can stop doing things that are in best interest of own users. Most often companies make such decisions for profit. In many cases they even intentionally cripple their apps in order to offer products fixing that issue they created and sometimes they just do it because they are asked by authorities.

Many platforms started with great and honorable goals, wanted to change the word. But when they became popular, they transformed into the opposite with only goal being profit. The centralized internet is nearly completely profit driven. And users just follow because they don't have other options... or at least they don't know that there are options on the horizon.

This problem was addressed by Skynet Labs with their Homescreen app. It won't help you with centralized apps (decentralized alternatives need to be made) but If you ever used some DeFi app where developer changed it over night so it was useless to you, with Homescreen it won't happen again.

Good example is when Uniswap delisted large number of assets. Everything was still in blockchain but users were accessing it through interface that was changed and refused to show those assets. It is as if you were using a calculator with numbers 0-9 and suddenly all numbers would be removed. The calculator would still have the ability to work with the numbers, but you would have no way to input them.

Homescreen is application that allows users to fully decentralize their web3 frontends. You just enter a link or name of app and it gets copied to your own personal space using your MySky decentralized identity. Whenever you then open that app from Homescreen, your own copy will load. And it doesn't matter if the developer changed the app meanwhile.

Keep in mind that when you are using apps from your Homescreen (instead of their hns domain that is under control of the app's developer), your apps will never update unless you do so by using the button Check for updates or adding the app again through search bar. 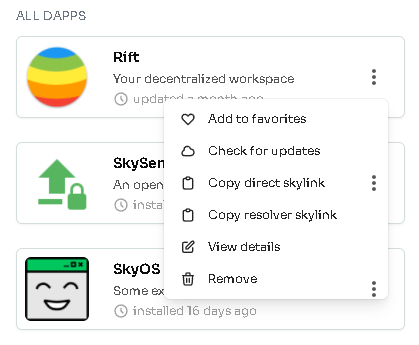 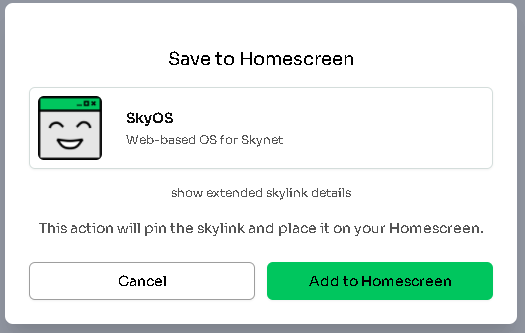 If you wish, you can read more details in the official blog post.

By now, you have everything set to start fully enjoying Skynet. You can start by checking out some of the default apps in your Homescreen or continue to the next article where we take a deeper look at other popular apps and what's in development.